But lost in the depths of the fjord in Oslo, stretching out from the capital, is a trove that would please any intrepid archaeologist or Nordic noir sleuth: sunken Viking trinkets, bullion from Hitler’s prized warship and, possibly, a few victims of homicide.

Mostly, though, the fjord is filled with garbage, like unwanted cars. And that has alarmed environmentalists.

“Not many years ago, a mayor said, ‘If you want to get rid of a car, put it on the ice,'” said Solve Stubberud, general secretary of the Norwegian Divers Federation.

Now, the capital is turning to new technology to help pinpoint the litter so that human divers can scour it off the seabed. This past Thursday, board members of Oslo’s Port Authority approved a pioneering trash-removal plan.

“We will test out drones,” said Svein Olav Lunde, the chief technical officer of the Oslo Port Authority, shortly after the meeting, explaining how these unmanned vessels will be used to help clear out underwater “islands of trash.”

Geir Rognlien Elgvin, aboard member, says he believes that Oslo’s port will be the first in the world to try this sort of trash pickup. The drones will plunge into the depths of Oslo Fjord this spring. An electric-powered ship with a crane will join the cleanup fleet by next year.

Oslo is turning to drone technology partly because of a dead dolphin — bloodied, beached and ensnared in plastic. Gory images of the carcass, taken in January on a trash-strewn shore of Oslo Fjord, resonated on social media among Norwegians, who tend to see their jagged coastline as a paragon of untouched natural beauty.

Stubberud said that recent images of beached dolphins and whales have woken up Norway, but that “plastic is the real problem.” Politicians and the public have shown more interest in the cleanup campaign in the past two years, he said.

But it is mainly driven by environmentalists. Ambitious plans to clean up the city’s industrial waste and sewage have been in the works for decades, along with a proposal for a car-free city center and a ban on using oil to heat buildings that is to go into effect in 2020. Campaigns like these won Oslo the European Green Capital Award for 2019.

Fjords are indelibly linked to Norway’s identity as a seafaring nation. The long, narrow, deep inlets form at the base of mountains where ocean water flows into valleys formed near the coast. The Oslo Fjord is 62 miles long.

But in the fjord — roughly one-third of Norway’s 5 million people live on its shores — the problems started with industrialization and increased shipping after the oil boom in the 1960s and ‘70s.

Even as the first drones are set to plumb the fjords, the national government is moving in another direction. Norway is one of the few countries that allows offshore dumping of mining waste, which can destroy vast numbers of fish stocks in fjords with hundreds of thousands of tons of sludge.

Norway has refused to sign an International Union for Conservation of Nature resolution outlawing the practice, putting it in the company of Chile, Indonesia, Papua New Guinea and Turkey.

“It’s wrong, and I wish that we didn’t do it,” said Lan Marie Nguyen Berg, vice mayor for the environment and transportation in Oslo. Nguyen Berg says Norway should preserve the fjords “for future generations.”

But the national government has emphasized that the mining projects provide local jobs.

Now, to tackle the household trash in the city’s surrounding seabed, a drone bidding war awaits for the technology to map the trash spots.

“There are whole households of furniture,” Christine Spiten, 27, a drone operator and tech entrepreneur, said recently at Oslo’s Lysaker River, which forms the boundary between the municipalities of Oslo and Baerum.

Spiten spoke before unraveling a bright yellow cable of rubber and Kevlar that linked a video game controller and touch screen to an underwater drone called BluEye. She had showcased the drone to representatives of the port authority and Norway’s shipping industry at the mouth of the river in February. The demonstration uncovered a rusty red bike and showed how drones could save time, money and hassle in cleaning the seabed.

Spiten and her team in the seaport town of Trondheim, where she lives in a sailboat, engineered the drone’s technology. She said her skills were partly drawn from her training at an oil company. Some board members see Spiten as the favorite to take home the contract, but she has stiff competition from international drone makers.

After the meeting on Thursday, the litter collection plan settled, Roger Schjerva, chairman of the port authority, noted even more important items in the fjords that continue to need urgent attention: mines.

The mines date back to World War II. There are more than 1,550 of them in Oslo Fjord. Of the 270 that have been located so far, around 100 of those have been detonated, said a spokesman for the Royal Norwegian Navy. When detonated in the fjords, they can damage ships and fish. The mines are also leaking.

So another wave of mine sweeping may come to the fjords. Schjerva said, “We will prioritize removing remaining mines from World War II.” 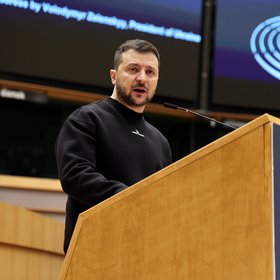