Defying most polls and predictions, a Latino won the Republican Iowa caucuses, and another Latino came in third. Together, they won more than half the vote. With Sen. Ted Cruz taking nearly 28 percent of the vote and Sen. Marco Rubio getting 23 percent, each vastly surpassed the results for any other Latino candidate in any previous United States presidential contest. How is that not being celebrated as historic or at least worth a headline for a day or two?

The answer is not that complicated: Neither Cruz nor Rubio meets conventional expectations of how Latino politicians are supposed to behave.

Neither of these candidates claims to speak for the Hispanic population or derive a crucial portion of their support from Hispanics, and neither bases much of his political identity on being a Latino. To varying degrees they oppose legalization for unauthorized immigrants, a policy that is central to most organized Latino political interests and that is supported by a great majority of Latino elected officials and Latino voters.

No less an arbiter than Jorge Ramos, the Univision anchor, seemed to condemn them without naming names in a column last month. "There is no greater disloyalty than the children of immigrants forgetting their own roots. That is a betrayal," he wrote. It is criticism that echoes the rhetoric aimed at Justice Clarence Thomas of the Supreme Court and other successful members of minority groups who are perceived as failing to uphold their own group's interests.

The day after the caucuses the headline in La Opinión, the nation's largest Spanish-language newspaper, was "Ted Cruz, first Latino to win the Iowa caucuses. Why aren't we celebrating?" The story argued that Cruz denies his Hispanic identity. It recounted in great detail how at the age of 13 he jettisoned his Spanish nickname, Felito, in favor of Ted, which derives from his middle name, Edward. The story concluded that Cruz's disregard for his own identity, along with his extreme positions on immigration, posed an "insurmountable barrier" between him and a majority of Latino voters.

Iowa put both Cruz and Rubio into the top tier of contenders, and so the identity issue is bound to get further complicated as they begin to compete with each other more directly. In their caucus night speeches Cruz pounded home his vows to crack down on unauthorized immigration, while Rubio emphasized his immigrant parents' struggle to realize the American dream. The contrast was not lost on Latino journalists. La Opinión's story on Rubio had him "walking a tightrope" on immigration, mollifying the Republican base with tough talk while using his own immigration story to appeal to moderates. Like many English-language analysts, Univision's evening news proclaimed Rubio the "real winner" in Iowa for coming from behind to almost catch Donald J. Trump, and it included interviews with voters who hailed his crossover appeal.

Just one night of voting gave us a firm reminder that minority group identities are neither fixed nor categorical, but that instead they can shift and take multiple forms. We learned that when Barack Obama's first presidential campaign took off with a victory in Iowa. In 2008 the voters got to know a politician whose ancestry and upbringing were far from typical of the African-American population but who nonetheless served as that population's tribune in powerful ways. Obama walked his own tightrope by striving not to be defined by his race even as his political strategy depended on rallying black voters to his cause.

Latino identities are even less fixed and categorical than those of African-Americans because they do not draw on a singular historical experience like slavery nor the insidious social marker of race.

Instead, Latino political culture is relatively new and embraces highly varied constituencies. Political identities differ according to where people came from, when and how they got here and where they ended up. Just as 2008 provided many Americans their first opportunity to consider voting for an African-American candidate who had a serious chance of succeeding, the Iowa results this year ensure that many Americans will be looking closely at Latino politicians for the first time, and it is going to happen under peculiar circumstances.

Having two candidates providing the lessons rather than just one ensures a muddle. They both come from a national origin group, Cubans, with a distinctive political identity shaped by Cold War exiles. Cubans in the United States have reliably voted Republican, though that is shifting, and they make up just around 4 percent of the Hispanic population. The early primaries will distort their identities as they compete for the votes of angry whites against a rival, Trump, who has made hostility toward immigrants his signature.

Who knows what facets of their identities will emerge if Cruz or Rubio or both are still on the stump by the time states with big Latino populations, like Texas, Florida and California, pick delegates?

If either is still in the race next fall, when Republicans will be obliged to compete with Democrats for Latino votes, we'll know whether Iowa, of all places, opened a new chapter in the history of minority group politics again. 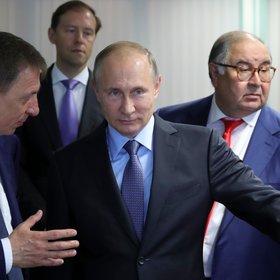