DENVER - As he ponders two futures, one in the White House, the other back home in Belmont, Mass., Mitt Romney is juggling two books: Mornings on Horseback a biography of President Theodore Roosevelt, and The Faithful Spy, a thriller about a daring C.I.A. agent.

He wakes up around 5 a.m. for a workout and a conference call with his senior staff members, as he has all year, but he is adjusting to one of the new burdens of a would-be president: a security bubble that keeps him from popping into McDonald's and from hitting the hotel gym.

In the final days of the run for president, Mr. Romney, the Republican nominee, has arrived at a strange and unfamiliar moment. The political prize that eluded him in 2008, and his father, George, four decades before that, is suddenly within agonizingly close reach, despite it all: an ugly and seemingly endless primary, wall-to-wall attacks by Democrats on the private equity firm he founded, a botched foreign trip and, not infrequently, gaffes.

At a rally on Friday night, Mr. Romney stood before more than 20,000 cheering Ohioans, with his five sons sitting off to the side in red or navy "Romney-Ryan" fleeces. "Tonight we entered the final weekend of the campaign," Mr. Romney told supporters in West Chester. "At Obama rallies, they're saying, 'Four more years.' We have a different cry, of course. What is it?" The crowd chanted: "Four more days! Four more days!".

He knows, of course, that it could all end for him tonight inside a ballroom at the Boston Convention Center, a prospect that would snuff a decade's climb through the ranks of American politics. He is 65, and it is hard to imagine a third presidential campaign. But for now, he seems to be willing himself into the presidency, as much for the confidence of his staff as for motivating the undecided voters.

On Friday, he started to read the line of a speech for a rally in Ohio. "I want to help the hundreds of thousands of dreamers," the prepared text had him saying. "I will." He decided to tweak the wording. "When I am president," he added, "I will."

This is a person who realizes that the presidency is within his grasp," said Eric Fehrnstrom, a senior adviser. 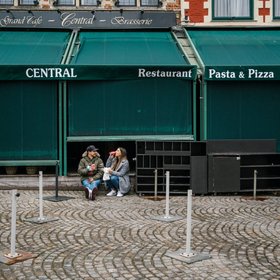