But in certain right-wing corners of the web — and, increasingly, from more mainstream voices like Rush Limbaugh and a commentator on CNN — the students are being portrayed not as grief-ridden survivors but as pawns and conspiracists intent on exploiting a tragedy to undermine the nation’s laws.

In these baseless accounts, which by Tuesday had spread rapidly on social media, the students are described as “crisis actors,” who travel to the sites of shootings to instigate fury against guns. Or they are called FBI plants, defending the bureau for its failure to catch the shooter. They have been portrayed as puppets being coached and manipulated by the Democratic Party, gun control activists, the so-called antifa movement and the left-wing billionaire George Soros.

The theories are far-fetched. But they are finding a broad and prominent audience online. On Tuesday, the president’s son, Donald Trump Jr., liked a pair of tweets that accused David Hogg, 17, who is among the most outspoken of the Parkland students, of criticizing the Trump administration in an effort to protect his father, whom Hogg has described as a retired FBI agent.

Hogg, the high school’s student news director, has become a sensation among many liberals for his polished and compelling television interviews, in which he has called on lawmakers to enact tougher restrictions on guns. Just as quickly, Hogg attracted the disdain of right-wing provocateurs like The Gateway Pundit, a fringe website that gained prominence in 2016 for pushing conspiracies about voter fraud and Hillary Clinton.

In written posts and YouTube videos — one of which had more than 100,000 views as of Tuesday night — Gateway Pundit has argued that Hogg had been coached on what to say during his interviews. The notion that Hogg is merely protecting his father dovetails with a broader right-wing trope, that liberal forces in the FBI are trying to undermine President Donald Trump and his pro-Second Amendment supporters.

Others offered more sweeping condemnations. Alex Jones, the conspiracy theorist behind the site Infowars, suggested that the mass shooting was a “false flag” orchestrated by anti-gun groups. Limbaugh, on his radio program, said of the student activists on Monday: “Everything they’re doing is right out of the Democrat Party’s various playbooks. It has the same enemies: the NRA and guns.”

By Tuesday, that argument had migrated to CNN. In an on-air appearance, Jack Kingston, a former U.S. representative from Georgia and a regular CNN commentator, asked, “Do we really think — and I say this sincerely — do we really think 17-year-olds on their own are going to plan a nationwide rally?” (He was quickly rebuked by anchor Alyson Camerota.)

Conspiracies, wild and raw online, are often pasteurized on their way into the mainstream. A subtler version of the theory appeared Tuesday on the website of Bill O’Reilly, the ousted Fox News host. O’Reilly stopped short of saying the students had been planted by anti-Trump forces. But, he wrote: “The national press believes it is their job to destroy the Trump administration by any means necessary. So if the media has to use kids to do that, they’ll use kids.”

Some of those who have been spreading the conspiracies are facing consequences.

Benjamin Kelly, an aide to a Florida state representative, Shawn Harrison, emailed a Tampa Bay Times reporter on Tuesday accusing Hogg and a classmate, Emma Gonzalez, of being actors that travel to the sites of crises.

“I made a mistake whereas I tried to inform a reporter of information relating to his story regarding a school shooting,” Kelly tweeted. “I meant no disrespect to the students or parents of Parkland.” His boss, Harrison, said on Twitter that he was “appalled” by Kelly’s remarks.

But by Tuesday evening, a new conspiracy was dominating Gateway Pundit’s home page. “Soros-Linked Organizers of ‘Women’s March’ Selected Anti-Trump Kids to Be Face of Parkland Tragedy,” read the headline. Within an hour, it had been shared on Facebook more than 150 times. 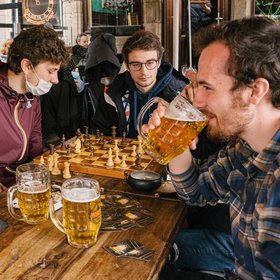