On this particular weekend, though, things were different. Visible in the distance, the stadium lights had been turned on, and a crucial match against Lierse was about to start. But few people in this Dutch-speaking city in the Flemish north of the country seemed really excited.

It was right after the twin terrorist attacks in Brussels, and politicians in the capital had just canceled a protest march against fear, out of fear of more attacks. That, it seemed, was more than Moyaert and the other self-styled "soccer hooligans" in a group known as the Antwerp Casuals could stand.

In an interview this week, Moyaert said he called the leaders of the main rival hooligan groups and together they decided that on the day of the canceled march they would head to Brussels, the capital, where the French language dominates.

Dressed in black, shouting insults against the Islamic State, they arrived waving the flag. Not the black lion of Flanders, Moyaert emphasized, but the black, yellow and red national flag of Belgium.

"It was unprecedented," Moyaert said. "Our message was, 'If hooligans can unite under the national flag, the whole country can.' We thought we would be welcomed as heroes."

But they were wrong.

Left-wing activists saw them approaching and started shouting warnings that the hooligans were fascists. Fights broke out. The riot police showed up. The international news media had a field day reporting on the neo-Nazi soccer hooligans. And once again, Belgium, among Europe's most divided and troubled countries, looked like a mess.

"It's hard to unite the country," Moyaert said. "But I still believe we can keep things together." Asked about the others in his group, he paused. "What do my friends think? Forget it, they just want independence."

The Brussels attacks have shaken up people in Flanders, just as elsewhere in the country. But weeks later many here are asking deeper questions: whether the faltering, French-dominated federal government in Brussels can cope with the difficult challenges of immigration and terrorism; or, ultimately, whether the Flemish people are not better off going their own way as an independent nation with Antwerp as its capital.

One obvious monument to Flemish independence, the Iron Tower, rises 275 feet over the flat landscape of western Flanders, in the town of Diksmuide, and bears at its top a row of massive letters, an abbreviation for "All for Flanders - Flanders for Christ."

It was built after World War I, at the start of the Flemish national movement, when soldiers returning from the muddy trenches and blood-spattered battlefields refused to accept the prewar status quo of French dominance. In 1946, the tower was blown up by unknown people, though many suspected French-speaking groups. An even taller tower was immediately constructed in its place, though the pressure for Flemish separatism slowly subsided.

The prospect of division is never far from the national consciousness, particularly given that the nation's largest political party, the New Flemish Alliance, is dedicated to gradual, peaceful secession.

Belgium was not even a country until 1830, when a rebellion of the Southern Netherlands backed by France led to independence. French became the dominant language, and the resulting state structure was also favorable to those from Wallonia, the nation's French-speaking southern region. Dutch speakers, now a majority of 60 percent, were considered peasants by the French speakers, who found their potato stew culture nearly barbaric.

In addition to being divided between Dutch and French speakers, with a bit of German thrown in, Belgium still lacks cohesive national symbols. There is the "Atomium," a chrome structure made for the 1958 World's Fair. There is "Manneken Pis," a statue of a boy urinating. And, of course, chocolate, abbey-brewed beers and the national soccer team, the Rode Duivels, or red devils. That is about it, most Belgians, Flemish or Wallonian, agree.

The new challenges to Belgian unity were visible inside the Iron Tower one day recently. At its base was a small memorial for Bart Migom, a 21-year-old student from Diksmuide who died in the suicide bombings at Brussels Airport. He had been on his way to see his American girlfriend in Georgia.

"During the next elections we will see yet another move to the right," said Koen Coupillie, the leader of the local chapter of the New Flemish Alliance. "People are angry and feel powerless after these attacks, so we can expect that some will vote for extreme right parties."

Flanders had already taken a shift to the right over the last decade, with Coupillie's party sweeping up most of the votes and becoming, in 2014, the single largest political party in Belgium. On the other side there has been no political change. The Parti Socialiste, has for decades attracted the main French-language vote.

"Their solution for everything is completely different," Coupillie, 32, said of the Parti Socialiste. "They just want to keep old structures in place, while we want to reform and improve."

Standing on top of the tower, which affords a panoramic view of preserved trenches from the First World War, Coupillie pointed at the new location for a center for asylum seekers, where 200 refugees would soon be housed. "We had a town gathering," he said. "People were calm, but it will take a long time for them to accept outsiders, I expect."

Immigration has been a hot-button issue in Belgium, as elsewhere in Europe. Between 2000 and 2010, Belgium accepted more immigrants than Canada, which has more than three times the population. More than 25 percent of Belgium's 11 million people have an immigrant background, and many of them, from former French colonies like Morocco, speak French.

At a farmer's market in Aalst, a Flemish city close to Brussels, many said the integration of Muslims in Belgium had failed, and laid the blame with the French-dominated elite in the capital.

"We live separated," said Jos Wauters, a civil servant from the nearby city of Affligem, known for its blond beer brewed in a nearby abbey. "We don't meet, we don't talk. It's not working out."

He blamed the left-wing French parties, which had long blocked national laws on compulsory language courses. "Meanwhile, they just continued inviting people to come. Of course we have huge problems now." His wife nodded, though when she spoke her accent revealed her Wallonian background.

"We can all live together, Flemish and Wallonian," Wauters said, smiling and pointing to his wife, "but only in Flanders." 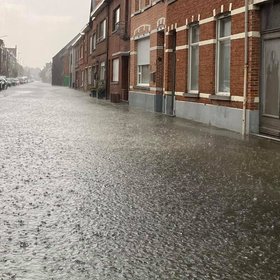