She rambled on about why she considers herself his biggest supporter, including his endorsement of equal pay for women, which the millionaire movie star said was "very important to me as a working mother."

Then came what was apparently on her mind all along. "You're so handsome that I can't speak properly," she said before handing the microphone to Obama.
The crowd - which included actors Julia Roberts and Bradley Whitford - erupted in laughter and cheers.

"I'm taking her to the next event," Obama said. He then embarked on a roughly 20-minute speech that he has given dozens - if not hundreds - of times at fundraisers in the homes of the rich and famous across the country.

He ran through the issues confronting the country. He praised the growth of the economy under his watch. Then he complained about the Republicans' reluctance to work with him. And he finished by saying that the congressional elections next month were critical to the country's future.

The fundraiser capped an uneventful day for Obama, who began a three-day swing through California on Thursday. Earlier, he held a town-hall meeting at Cross Campus, a tech entrepreneurs' center in Santa Monica, where he discussed issues confronting the generation known as millennials.

Obama, in a reference to his own history as a state politician in Illinois, told the Lieu volunteers that "state senators make outstanding members of Congress." He praised the volunteers, adding, "If I'm not directly shaking your hand, you should be on the phone," he said.

But it was the Democratic National Committee fundraiser at Paltrow's home that was the day's memorable event. Guests paid $1,000 to listen to Obama's speech and $15,000 to have dinner with him.

It was not the first fundraiser that Paltrow has hosted for Obama - although it was the first one he has attended. In 2012, Paltrow held an event for the president's re-election campaign in London, where she was living with her then-husband, Chris Martin of the band Coldplay.

Obama said that he did not attend that fundraiser because it would not have done him any good to knock on Londoners' doors. He sent his campaign manager, Jim Messina, in his place.

Paltrow's home appeared like something created by Restoration Hardware on a multimillion-dollar budget. The brick exterior is painted gray, and there is a gravel driveway, an outdoor fireplace and a small fountain in the backyard.

As the actress spoke, waiters wearing all black stood behind the crowd holding hors d'oeuvres. Many guests held glasses of wine or cocktails as they listened.

Other than her remarks about the president's looks, Paltrow stayed on message. She said that the president needed a Congress controlled by Democrats to move the nation in the right direction.

"It would be wonderful if we are able to give this man all the power he needs to accomplish the things he needs to," Paltrow said.

After handing the microphone to the president, she sat down next to her two children - Moses and Apple - to listen. 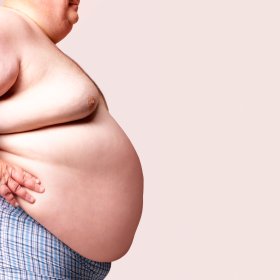 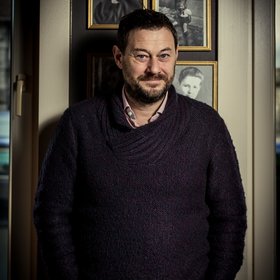 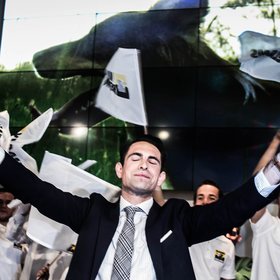 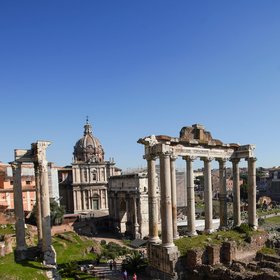