Designed at a time when public interest in Viking culture is experiencing a renaissance, the theme for Norway’s Alpine ski team uniforms this season is “the Attacking Viking,” an homage to the team’s nickname. But the sweater features a symbol known as the Tyr rune, which neo-Nazis want to claim as their own.

There is little evidence that the rune originally had any symbolic significance beyond its sound value, but the letter shares the name of a Norse deity popularly understood as the god of war, Tyr. Nowadays, most runologists consider it a letter no more mysterious than the letter T.

Even so, the presence of the Tyr rune on the team’s sweater design was enough to raise alarms. Norway’s security police have warned of the rise of a small but politically extreme and potentially violent group called the Nordic Resistance Movement, which uses the Tyr rune in its branding.

In the past year, the group’s members have held rallies outside synagogues and in town squares in Norway and Sweden. One of the group’s slogans, “Enough is enough,” even showed up on a drum in last summer’s white nationalist rally in Charlottesville, Virginia.

In many countries a national ski team’s woolen sweater design would not be a major issue, but Norwegians take their knitting seriously. With each games, both the team sweater and its knitting pattern are available for sale to the public. Now, the controversy has caused divisions over whether the ski team’s sweater can be worn with pride.

Margaretha Finseth, whose job as the design and brand manager at the House of Yarn, a wholesaler, is to select and sell well-known patterns for Norwegians to knit, decided against this particular sweater.

A published author on Norwegian knitting, Finseth said she did not want to give knitting ideas to white supremacists. “Our greatest fear was that in the next big demonstration everyone would appear” in the ski team’s sweater, she said.

Her decision not to sell the team’s pattern drew angry criticism. Neopagans, Viking re-enactors and fans of the national ski team expressed dismay at what they considered “giving up” the collective ownership of ancestral symbols to a tiny, unrepresentative minority.

Some knitters vowed to track down the sweater design and knit it anyway.

The manufacturer, Dale of Norway, expressed frustration and disappointment over the whole situation. Hilde Midthjell, the company’s chief executive, vowed to face down any attempts by white supremacists to co-opt symbols that belonged to a shared Norwegian heritage. She decided not to remove the sweaters from the production line.

“Neo-Nazis have marched with Norwegian flags,” she said. “That does not mean we stop using that, does it?”

The design is still the downhill ski team’s official sweater this season. And while Midthjell said sales that continued to be strong, on a recent visit to two sweater stores, the “Attacking Viking” was not available. A salesman said that was due to lack of demand.

Midthjell’s stance was supported by Terje Emberland, a senior researcher at the Holocaust Center in Oslo and an expert on the history of religion, who said that neo-Nazis today were trying to “occupy” Viking symbols just as Norwegian national socialists and Nazi Germany did in the 1930s and ‘40s.

“It took decades after World War II before we could start using Viking symbols with pride again,” he said.

As for the athletes, there is a fallback option, as another design called “Olympic Passion” has also been released. But the “Passion” is Norway’s overall official sweater for next month’s Olympic Games, while the “Attacking Viking” design is particular to the Alpine ski team’s season.

The Norwegian Ski Federation, which organizes the national teams, said each athlete could decide whether to wear the sweater — though it did confirm that it had organized a second photo shoot of athletes in Dale sweaters after the issue came to light in the national news media in October. In the second, many were no longer wearing the “Attacking Viking” design.

The athletes, asked which sweater they would be packing for the competitions, were reluctant to say.

Kristin Lysdahl, who will represent Norway’s downhill team, said she did not wear the “Attacking Viking” sweater herself — “and none of us use it in front of reporters.”

Jonathan Nordbotten, a member of the men’s World Cup team who will also be competing in the Olympics, was equally reluctant. “No one on our team uses that sweater anymore,” he said. 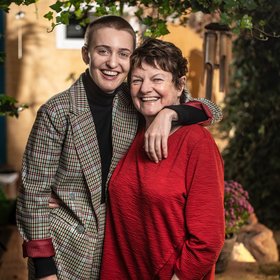