Seventy-one migrants, four of them children, suffocated within about 90 minutes after they squeezed into the truck's airless refrigeration chamber more than 24 hours earlier, investigators concluded.

The discovery, on Aug. 27, riveted attention on the human tidal wave of migrants crashing into Europe. It raised questions about both the cruelty of the smugglers and the desperation of their clients.

The 71 deaths remained shrouded in mystery. All but a handful of the migrants had traveled without passports in the hope of starting new lives, and the Austrian police have waited to match fingerprints or DNA samples. The authorities have so far confirmed the identities of only about half the dead - migrants originally from the cities of Qamishli and Deir Ezzor in Syria, and Erbil and Sulaimaniya in Iraq's Kurdistan region.

The migrants did not start out helpless or naive, their families say. In interviews in six cities across Turkey, Iraq and Austria, the families of more than a dozen of the dead said many of the migrants were affluent and educated. They paid to mitigate the risks of the journey, and they died with money in their pockets. The story of their deaths illustrates the manipulations smugglers use to exploit the psychology of even the most resourceful migrants, leaving them far more desperate and vulnerable than when they began.

Almost all their relatives insisted, despite the evidence, that the migrants knew better than to get into the back of a crowded truck - even a truck that was better ventilated.

"It is impossible," said Hassan Khalid, 30, a Syrian from Qamishli now living in Erbil, whose two brothers died in the truck.

The older of the brothers, Hussein Khalid, 34, was an archaeology graduate student who wanted to reach Germany to complete his doctorate and brought along a younger brother and a family friend. "He is well educated and very careful, and he talked to a lot of people who had made that trip," Khalid said. "Everyone agreed: Never get on a truck."

In Internet-telephone calls home, Hussein told his family that he had insisted on a sturdy "yacht" instead of a raft to cross the Mediterranean from Turkey to Greece, at a premium price of $1,800 per person. He made his way from the boat to Belgrade, Serbia, without the help of any smuggler.

He sent home a photograph of himself lounging with his feet up in a Belgrade bunkhouse where the three men were renting beds for $12 a night, and he left relaxed and confident audio messages for his family weighing whether to hire a smuggler for the final leg of their journey.

They hired one just to be safe, he told his family, to navigate the aggressive border security of the Hungarian police. The family said Hussein paid about $1,800 a person to a smuggler named Karwan el-Sulmani, who promised a passenger car ride all the way to Germany. Hussein had about $4,300 left in his possession when he entered the truck, his brothers said.

More than 20 of the 71 dead migrants came from the oil-rich Kurdistan region of Iraq, a relatively stable and prosperous area that remains a destination for job seekers from India, Pakistan, Africa and elsewhere.

Several families there said they had made advance payments of as much as $4,500 to a local smuggling agent working with Sulmani. The agent does business under the name "Jamal Guarantee" - although none of the interviewed families of his dead migrant clients have recovered their initial payments.

To avoid the risk of a Mediterranean passage, four friends from the same neighborhood of large, comfortable homes in Sulaimaniya paid the smugglers an extra premium - about $9,000 to $11,000 each - to travel by land north from Turkey through Bulgaria. "We paid more to go the safe way," said Jamal Hussein, 49, whose son Shwan Jamal Hussein, 23, died in the truck.

His father insisted that Shwan had driven a truck himself and "knew he could not survive it."

Another of the four, Osman Mohamed, 35, was a well-paid employee at a telecommunications company who also owned his own mobile phone shop. He wanted to go to Germany for medical treatment for kidney stones, his family said.

"We don't have a problem with money," said his brother, Bahman Mohamed, 33.

A third, Zardasht Mohamed Abdulla, 28, who also died in the truck, left behind a bus parked in front of his home that his family had bought him for $27,500 - more than double the average annual income in Kurdistan.

The four friends were detained at a camp in Bulgaria for 26 days but continued on their journey with the same smugglers to Belgrade. The four sent home pictures of themselves smiling in sweaters in a lush Serbian forest.

In Serbia they set their sights on Germany, which is known for its generosity to asylum seekers. They agreed to pay Sulmani, the Kurdish smuggler, an additional $680 each for a car ride to get there. None of the smugglers answered phone calls seeking comment.

Until this summer, smugglers typically charged migrants by the carload, as in a taxi, said Gerald Tatzgern, director of the human trafficking division of the Austrian police. "Normally a smuggler might have gotten 500 euros per car," he said, about $566.

But with the exploding numbers this summer, smugglers began charging per head instead of per vehicle. "They said, 'What about 500 euros per person?' And the migrants opened up their rucksacks and paid!" Tatzgern said. "This is a good business."

The economies of scale created an incentive to jam migrants into the back of ill-suited freight vehicles, and the profitable work attracted street criminals with little experience. "They stopped shoplifting. They stopped pickpocketing. Now they are smugglers," Tatzgern said.

The police and migrants both say smugglers who load the trucks now routinely hide the faces of the drivers. That way the drivers can abandon the trucks without fear of identification.

So many freight trucks full of migrants have been making the journey across Hungary that at least three others were discovered in the same 48 hours as the meat truck full of corpses. A truck containing 86 migrants was stopped in Germany, and the Austrian police found one with 81 migrants and the other with about 25, abandoned near the border with Hungary, according to the police and migrants. (All survived.)

All of the families interviewed said they last spoke with the migrants on the evening of Aug. 25, and that all had expected a car ride to Germany.

The four friends from Sulaimaniya had passed the previous night walking hours through a forest across the border from Serbia to Hungary. Osman Mohamed, speaking by telephone from a Hungarian forest, sounded exhausted and desperate, said his brother, Bahman.

"'Come back, forget about the money,'" Bahman said he told Osman, reminding him that the family had plenty.

But after paying extra to travel by land and spending four weeks detained in Bulgaria, Osman felt he had come too far already. "There is no way I am going back," he said, according to his brother. "Even if the last way is by sea, I am going to take it!"

Psychologists say the impulse is understandable. "When you are deciding whether to leave your country or not, the idea of going into a poorly ventilated truck might seem absurd," Stephen D. Reicher, a social psychologist at St. Andrews University, in Scotland, wrote in an email. "It threatens an extreme loss (of life) when you aren't even convinced of the overall gain of leaving."

But when a migrant nears his destination, the choice becomes "whether to fail, to have wasted all the efforts and risks involved so far, or else to take a further risk and to possibly succeed," he continued. "We are far more likely to take the latter risk."

Another family, the seven members of the Sheikh family of Deir Ezzor, Syria, had traveled together from the cities of Mersin and Urfa in Turkey. They had come from one of their city's most affluent and respected families before the civil war, and they brought along four friends from their hometown.

All 11 survived the Mediterranean passage by boat from Turkey, then the tear gas and clubs of the Macedonian border police. They rented hotel rooms in Belgrade on the night of Aug. 23, and their smuggler, known as Abdel Malek al-Afghani, arranged four taxis to go toward the Hungarian border.

But the driver of one taxi inexplicably changed course and deposited Yusuf el-Sheikh, 39, with a teenage niece and nephew somewhere in the woods near the border. The Austrian police say smugglers often seek to divide migrant families with such tricks, to keep them tractable.

After a night in the forest, Yusuf el-Sheikh spent the last of his cash on a taxi back to Belgrade. His oldest brother, Abdel Salem, 55, was carrying the rest of their money.

When the two brothers reached each other by telephone the next day, Salem reported that he was trapped somewhere in a Hungarian forest. The police had surrounded the migrants, he said, and the family was running out of food and water.

"I told my brother, 'Please come back, you have to come back,' because I had a bad feeling," Yusuf el-Sheikh recalled in an interview. He and his teenage niece and nephew slept the night in a park in Belgrade.

Then, about 6 p.m. Aug. 25, Abdel Salem called to say they could wait no longer. The smuggler was bringing cars to take them to Germany, he told his brother.

Al-Afghani, the smuggler, called el-Sheikh a short time later. Another taxi picked up him and the teenagers near a bridge across the Danube and drove them toward the border, and this time al-Afghani led them with a group of about 60 on a seven-hour walk through the night deep into Hungary. They slept the next day in a crowded safe house somewhere in Hungary.

The next night, on Aug. 26, al-Afghani led el-Sheikh and about 25 others bound for Germany on a short walk to a road. Three of the migrants were younger than 5, Yusuf said, and al-Afghani said he would return with cars. But instead he pulled up with a truck. "He just came back and said, 'Get in,'" el-Sheikh recalled.

They would be packed standing together without room to sit for what was expected to be a nine-hour drive, Yusuf said. He worried they would be unable to breathe.

"We just wanted the journey to be over, and we kept asking, 'Where is our family?'" El-Sheikh recalled in a recent interview, in Vienna. "The smuggler told us, 'You are going to meet them in Germany.'"

El-Sheikh got in and survived. The Austrian police found the truck abandoned the next morning and let out the passengers.

His brother Abdel Salem had made a similar choice with a different result. Abdel Salem, his wife, a 23-year-old son and a 16-year-old daughter were among the 71 migrants found dead the same day in the meat truck. 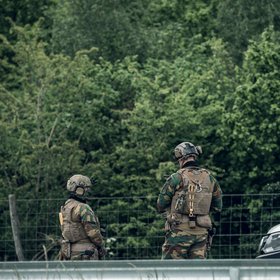 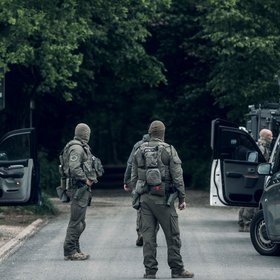