The symbolism was too powerful to ignore. As anyone who watched Israeli Prime Minister Benjamin Netanyahu's speech last week in Congress knows, one of the people prominently seated in the House gallery was the casino magnate Sheldon Adelson, a primary financial backer of both the Republican Party and Netanyahu. As The Washington Post's Colby Itkowitz reported, at one point Adelson's wife, Miriam, accidentally knocked her purse off the House gallery railing and it hit Rep. Brad Ashford, D-Neb., seated below. The Post noted that Adelson had given $5 million to the GOP's Congressional Leadership Fund super PAC, which had spent $35,000 in a failed effort to defeat Ashford in his 2014 race against Rep. Lee Terry. Ashford later joked to The Omaha World-Herald: "I wish I'd opened the purse. Do you think she carries cash?"

We certainly know that Sheldon Adelson does. And when it came to showering that cash on Republican presidential hopefuls and right-wing PACs trying to defeat President Barack Obama (reportedly $150 million in 2012), and on keeping Netanyahu and his Likud party in office, no single billionaire-donor is more influential than Sheldon. No matter what his agenda, it is troubling that one man, with a willingness and ability to give away giant sums, can now tilt Israeli and U.S. politics his way at the same time.

Israel has much stricter laws on individuals donating to political campaigns, so Adelson got around that in 2007 by founding a free, giveaway newspaper in Israel - Israel Hayom - whose sole purpose is to back Netanyahu, attack his enemies in politics and the media, and enforce a far-right political agenda to prevent any Israeli territorial compromise on the West Bank (which, in time, could undermine Israel as a Jewish democracy). Graphically attractive, Israel Hayom is now the biggest-circulation daily in Israel. Precisely because it is free, it is putting a heavy strain on competitors, like Yediot and Haaretz, which both charge and are not pro-Netanyahu.

Adelson then bought the most important newspaper of the religious-nationalist right in Israel, Makor Rishon, long considered the main backer of Netanyahu's biggest right-wing rival, Economy Minister Naftali Bennett. Last March, in an interview with Israel Army Radio after the Makor Rishon sale, Bennett said: "It saddens me. Israel Hayom is not a newspaper. It is Pravda. It's the mouthpiece of one person, the prime minister. At every junction point, every point of friction between the national interest and the interest of the prime minister, they chose the side of the prime minister."

The Washington Post said that last November at a conference of the Israel American Council, a lobbying group Adelson has funded, he joked in a public discussion with another wealthy Israeli: "Why don't you and I go after The New York Times?" Told it was family owned, Adelson quipped, "There is only one way to fight it: money." At this same conference Adelson was quoted as saying that Israel would not be able to survive as a democracy: "So Israel won't be a democratic state," he added. "So what?"
Last March in Las Vegas Adelson organized his own private Republican primary. Politico wrote at the time: "Adelson summoned [Jeb] Bush and Govs. Chris Christie of New Jersey, John Kasich of Ohio and Scott Walker of Wisconsin to Las Vegas. ... The new big-money political landscape - in which a handful of donors can dramatically alter a campaign with just a check or two." When Christie, in his speech before Adelson, described the West Bank as "occupied territories," some Republican Jews in the audience were appalled. So, Politico reported, Christie hastily arranged a meeting with Adelson to explain that he had misspoken and that he was a true friend of Israel. "The New Jersey governor apologized in a private meeting in the casino mogul's Venetian office shortly afterward," Politico reported. It said Adelson "accepted" Christie's "explanation" and "quick apology."

When money in politics gets this big, when it can make elected officials bow and scrape in two different countries at the same time, it is troubling. I'm sure Adelson cares deeply about Israel, but he lacks any sense of limits in how he exercises his extraordinary financial power - power he is using to simultaneously push Israel and the United States toward eliminating any two-state solution between Israelis and Palestinians, toward defunding the Palestinian Authority and toward a confrontation with Iran, not a diplomatic solution. People need to know this.

The most important bonds between Israel and the U.S. always emerged from the bottom up - a mutual respect between two democracy-loving peoples. Money can't buy those bonds, but it can threaten them by going to excess - by taking Israel's true good will in America and using it to help one party "stick it" to the president, one big donor drive his extreme agenda, one party appear more pro-Israel than the other for electoral reasons or one Israeli politician win re-election. People who go "all the way" like this will one day go over a cliff. They will regret it. So will the rest of us. 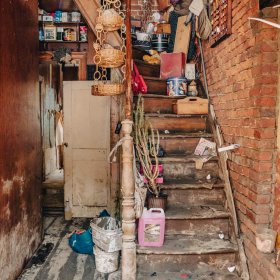