Kathmandu sits on a major geological fault, and the Big One has been long overdue. My husband always tried to get me to laugh it off. "Earthquakes aren't like pregnancies," he said. "They don't have due dates." Besides, we had lived through three small quakes. No big deal.

We packed "go bags," and put them downstairs, upstairs and outside in the garden. A tent, rain gear, blankets and so on. My Nepalese friends sometimes made fun of me. My friend Sasha reminded me that some things were beyond our control. If it was my karma, she would say, it was my karma.

About 11:45 a.m. Saturday, my 10-year-old son, Lucas, and I were driving down a steep hill on our way to a pizza lunch at the Roadhouse Cafe in Patan, a city known for its rich cultural heritage just across the Bagmati River from Kathmandu. At first, I thought we had blown a tire, or maybe that a motorcycle had hit us from behind. Then I lost control of the car as it was tossed right and left as if by rolling waves.

I lost track of time. Women ran across the road screaming. A nearby wall collapsed. A motorcyclist fell from his bike. I stopped in the middle of the road, turned off the engine and unlocked the doors. I told my son to lean over and cover his head as best he could. "It's an earthquake," I told him, and noticed my hands were shaking.

The rest of the day was fueled by adrenaline. I managed to drive home, navigating around broken bricks scattered on the roads and houses that had collapsed. My husband is away on a business trip, but our dog, a Rhodesian Ridgeback, was waiting anxiously at our gate. The house was intact. To be safe, though, I began moving emergency gear outside, as far away from it as possible. Running upstairs to fetch our passports, an aftershock almost threw me to the ground. It felt like a huge tree cracking overhead.

In the evening, Lucas and I walked down our street and into a village, the oldest community of ethnic Newars in the Kathmandu Valley, a place where goats often live on the ground floor of homes and women wash their pots and their hair on the stoops. Making our way along the town's narrow, medieval paths, we passed building after building that had collapsed. Residents, police officers and Nepal Scouts were digging through the debris with their hands, trying to rescue those who had been buried. Others were setting up temporary shelters in any open space. Blankets and cushions were laid out in the middle of roads.

Neighbors were helping neighbors. Those with motorcycles were ferrying cheap plastic canvas for tents from shops that remained open. Many people stopped us, and asked if we needed food or water. Several invited us to spend the night with them.

This is why I love Nepal. People here help one another because they know the government often cannot. They reach out to one another, and they persevere. They open their shops, because what else can one do when the world is upside down?

On Sunday morning, I drove through the city on a motorcycle with a Nepalese friend, my son sandwiched between us. The government had declared a national emergency, so the roads were largely empty, just a few motorcycles and some packed buses. The city was a vast camp, with tents in every open space.

We visited the Pashupatinath Temple, one of the holiest shrines in the Hindu faith, first erected on the banks of the Bagmati River more than 1,000 years ago. It had not suffered too much damage, but in the back, spilling out of the cremation area onto a main path, was a row of corpses covered in saffron sheets. Extra cremation pyres had been set up, but it was not enough.

Casualties were especially high in the ancient city centers of Kathmandu, Patan and Bhaktapur, with their narrow warrens and tall, thin buildings built close together. Many died in traditional mud-brick homes that they had built themselves.

Even animals appear traumatized. Our dog won't leave my side and tries to force his way into our tiny tent. The city's huge flocks of crows - in happier times, residents have jested that this place should be named Crowmandu - have been on edge, freaking out with each aftershock.

I first came to Kathmandu in 1983 as a backpacker and returned while working on a master's degree in Indic studies. My husband's job brought me back once more. A population boom had transformed the Kathmandu Valley, its three cities now home to 2.5 million residents. We found a place with horrific air pollution, traffic that never seems to move and garbage everywhere. Yet my son and I have been happy here. The quirky, cynical, self-deprecating humor of Nepalis charmed me from the first day.

This is a city with a living history and a living religion. Where else could one see a Hindu shrine or a Buddhist chaitya on almost every street? Where else can one live surrounded by so many ancient temples and stupas that are listed as UNESCO heritage sites - and eat at restaurants serving cuisine from everywhere in the world?

Within 40 seconds Saturday, everything changed. The Durbar Squares in Kathmandu and Patan where tourists thronged - ancient plazas graced with temples and fountains opposite the old royal palaces - had been reduced to rubble, with only a few structures left standing. One of my favorite shrines, famous for its white domes and four giant, fearsome brass dragons with talons raised, is now a pile of cracked red bricks and dust.

Those who survived know they are lucky. Lucky that this did not happen during the frigid winter or monsoon season. Lucky that the quake hit in daylight rather than at night, when more people would have been indoors and casualties would have been worse. Lucky that it was a Saturday, when children were not in schools, most of which were shoddily built.

Saturday night, my son and I lay in our tent pretending to be on a camping adventure as a series of rumbling aftershocks shook the ground. With each one, we listened as screams of fear echoed in the darkness. I lit a lamp and trimmed my son's fingernails. I couldn't think of anything else to do, and I couldn't sleep.

My heart aches for Nepal and what has been lost. But I am buoyed by the generous spirit of its people. My son and I know that life here will get worse in the days and weeks ahead as fuel and water run low. But we also know we are in this together. 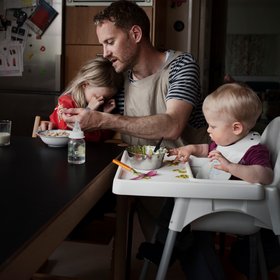