Red Army was the popular name for CSKA Moscow, a club team, and the main feeder for the Soviet national team.

"What they did was a creative renaissance in sport which is almost unmatched to this day," said Polsky, whose movie begins a limited run in New York on Friday before its nationwide release in January. "They approached it not just from a scientific point of view, but philosophically. Their training borrowed from dance, chess, literature, circus, painting, art. It was not just about winning and losing; it was artistry, a beautiful religious experience. That's what I was so passionate about."

The former Russian defenseman Vyacheslav Fetisov remembered the spiritual sensation of being in perfect sync with his teammates.
"We felt each other in our cells," he said.

It is rare to hear hockey described this way, especially Soviet hockey. In the United States and Canada, the great Soviet teams were often thought to be machinelike, monolithic and emotionless, save for glimpses of arrogance and deviousness. Many North Americans recall the Soviet losses: humbled by U.S. college players in the 1980 "Miracle on Ice" at the Lake Placid Olympics and by dauntless Canadian professionals in the 1972 Summit Series.

But others have different memories of those Soviet teams, which skated in great intersecting arcs, winding and unwinding like a Swiss timepiece on the ice, advancing the puck from stick to stick with astonishing accuracy. They ignored the slashing and pounding their frustrated North American foes employed to try to stop them.

And they usually won. From 1975 to 1991, Soviet club teams compiled a 58-40-10 record against NHL clubs, even though 92 of those 108 games were played in North America. In the Olympics from 1964 to 1992, the national team won seven of a possible eight gold medals, the last as the Unified Team after the fall of the USSR.

Fetisov, one of Soviet hockey's last great stars, does most of the talking in "Red Army," tracing the growth of the Soviet game from its birth in the ruins of the postwar USSR through its growth under Anatoly Tarasov, a coach, author and Renaissance man.

"Tarasov was smart, a practitioner and a critic at the same time," Fetisov said in a recent interview. "He was a philosopher, and as a speaker he was unbelievable. I never heard anyone close to him, how he could put into words what he wanted to see and hear from you."
For Fetisov, the Soviet principle of the collective found perhaps its best expression in team sport.

"After World War II the whole nation was rebuilding," he said. "It was a feeling of helping each other. In Soviet teams it was like that, and in almost any sport we were Olympic and world champions. Hockey, volleyball, water polo, basketball - any sport that needs collective thinking, we were No. 1. Our hockey was built for a creative, play-for-each-other style."

That level of teamwork and constant training required the Soviet players to live together almost year-round, which took a heavy toll on Fetisov and his teammates once the tyrannical Viktor Tikhonov took over as coach. Beautiful hockey came at a high cost.

"From the most not-free system for humans was born the most free style of playing the game," Fetisov said.

Polsky, 35, never saw Soviet hockey firsthand. But growing up in Chicago as the hockey-playing son of Ukrainian immigrants, he found a VHS tape of the 1987 Canada Cup tournament, particularly the three-game final between Fetisov's Soviet team and the Canadian team led by Wayne Gretzky and Mario Lemieux.

"I watched it religiously," Polsky said. "It was amazing. The Soviets would possess the puck 70 percent of the time. They wouldn't dump it in. If they were stopped at the blue line, they'd just go back, start again and put together another amazing passing sequence."

"Red Army" includes several clips of that vanished hockey, and when audiences in Toronto, New York, Lake Placid and even Savannah, Georgia, saw the film, they often gasped at the creative genius of the Soviets' play, Polsky said.

"Gretzky loved the movie," he said. "He brought his entire family to the screening in Toronto. But people who don't like sports or hockey are the ones who really love this. They come up to me and say, 'Wow, I never liked hockey until I saw this.'

"They turn on the TV these days and they're not going to see that kind of hockey."

In Russia, hockey in the Kontinental Hockey League is a low-scoring business with few soaring moments. In the NHL, it is a defense-first game played at a high level, but predicated on collision and caution rather than on creativity.

Polsky and Fetisov cited Patrick Kane of the Chicago Blackhawks as one of the few current players of true imagination and originality.
During last spring's Stanley Cup finals between the New York Rangers and the Los Angeles Kings, Polsky wanted to show his girlfriend what hockey was like. Not a fan of the sport, she had seen "Red Army" and was captivated by the hockey footage.

"We watched the Kings-Rangers game for like 10, 15 minutes, and she says: 'I don't even know what's going on. They're just slapping the puck around, banging each other into the boards,'" Polsky said. "In a span of 15 minutes, not one good play - it was all missed opportunities, errant passes, banging, dumping it in. It was embarrassing. Like, I don't want my girlfriend to see, because I want to show her the beautiful hockey that I appreciated, the sport that I love. And it's a shame, because a lot of people are turned off to hockey because of that."

"What those guys did was miraculous," Polsky said. "Slava said they always sold out the stadiums where they played. People wanted to see them. They wanted to see magic." 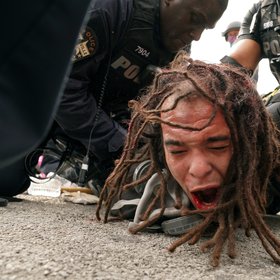