Good evening. To the United States Corps of Cadets, to the men and women of our Armed Services, and to my fellow Americans: I want to speak to you tonight about our effort in Afghanistan -- the nature of our commitment there, the scope of our interests, and the strategy that my administration will pursue to bring this war to a successful conclusion. It's an extraordinary honor for me to do so here at West Point -- where so many men and women have prepared to stand up for our security, and to represent what is finest about our country.

To address these important issues, it's important to recall why America and our allies were compelled to fight a war in Afghanistan in the first place. We did not ask for this fight. On September 11, 2001, 19 men hijacked four airplanes and used them to murder nearly 3,000 people. They struck at our military and economic nerve centers. They took the lives of innocent men, women, and children without regard to their faith or race or station. Were it not for the heroic actions of passengers onboard one of those flights, they could have also struck at one of the great symbols of our democracy in Washington, and killed many more.

As we know, these men belonged to al Qaeda -- a group of extremists who have distorted and defiled Islam, one of the world's great religions, to justify the slaughter of innocents. Al Qaeda's base of operations was in Afghanistan, where they were harbored by the Taliban -- a ruthless, repressive and radical movement that seized control of that country after it was ravaged by years of Soviet occupation and civil war, and after the attention of America and our friends had turned elsewhere.

Just days after 9/11, Congress authorized the use of force against al Qaeda and those who harbored them -- an authorization that continues to this day. The vote in the Senate was 98 to nothing. The vote in the House was 420 to 1. For the first time in its history, the North Atlantic Treaty Organization invoked Article 5 -- the commitment that says an attack on one member nation is an attack on all. And the United Nations Security Council endorsed the use of all necessary steps to respond to the 9/11 attacks. America, our allies and the world were acting as one to destroy al Qaeda's terrorist network and to protect our common security.

Under the banner of this domestic unity and international legitimacy -- and only after the Taliban refused to turn over Osama bin Laden -- we sent our troops into Afghanistan. Within a matter of months, al Qaeda was scattered and many of its operatives were killed. The Taliban was driven from power and pushed back on its heels. A place that had known decades of fear now had reason to hope. At a conference convened by the U.N., a provisional government was established under President Hamid Karzai. And an International Security Assistance Force was established to help bring a lasting peace to a war-torn country.

Then, in early 2003, the decision was made to wage a second war, in Iraq. The wrenching debate over the Iraq war is well-known and need not be repeated here. It's enough to say that for the next six years, the Iraq war drew the dominant share of our troops, our resources, our diplomacy, and our national attention -- and that the decision to go into Iraq caused substantial rifts between America and much of the world.

Today, after extraordinary costs, we are bringing the Iraq war to a responsible end. We will remove our combat brigades from Iraq by the end of next summer, and all of our troops by the end of 2011. That we are doing so is a testament to the character of the men and women in uniform. (Applause.) Thanks to their courage, grit and perseverance, we have given Iraqis a chance to shape their future, and we are successfully leaving Iraq to its people.

But while we've achieved hard-earned milestones in Iraq, the situation in Afghanistan has deteriorated. After escaping across the border into Pakistan in 2001 and 2002, al Qaeda's leadership established a safe haven there. Although a legitimate government was elected by the Afghan people, it's been hampered by corruption, the drug trade, an under-developed economy, and insufficient security forces.

Over the last several years, the Taliban has maintained common cause with al Qaeda, as they both seek an overthrow of the Afghan government. Gradually, the Taliban has begun to control additional swaths of territory in Afghanistan, while engaging in increasingly brazen and devastating attacks of terrorism against the Pakistani people.

Now, throughout this period, our troop levels in Afghanistan remained a fraction of what they were in Iraq. When I took office, we had just over 32,000 Americans serving in Afghanistan, compared to 160,000 in Iraq at the peak of the war. Commanders in Afghanistan repeatedly asked for support to deal with the reemergence of the Taliban, but these reinforcements did not arrive. And that's why, shortly after taking office, I approved a longstanding request for more troops. After consultations with our allies, I then announced a strategy recognizing the fundamental connection between our war effort in Afghanistan and the extremist safe havens in Pakistan. I set a goal that was narrowly defined as disrupting, dismantling, and defeating al Qaeda and its extremist allies, and pledged to better coordinate our military and civilian efforts.

Since then, we've made progress on some important objectives. High-ranking al Qaeda and Taliban leaders have been killed, and we've stepped up the pressure on al Qaeda worldwide. In Pakistan, that nation's army has gone on its largest offensive in years. In Afghanistan, we and our allies prevented the Taliban from stopping a presidential election, and -- although it was marred by fraud -- that election produced a government that is consistent with Afghanistan's laws and constitution.

Yet huge challenges remain. Afghanistan is not lost, but for several years it has moved backwards. There's no imminent threat of the government being overthrown, but the Taliban has gained momentum. Al Qaeda has not reemerged in Afghanistan in the same numbers as before 9/11, but they retain their safe havens along the border. And our forces lack the full support they need to effectively train and partner with Afghan security forces and better secure the population. Our new commander in Afghanistan -- General McChrystal -- has reported that the security situation is more serious than he anticipated. In short: The status quo is not sustainable. As cadets, you volunteered for service during this time of danger. Some of you fought in Afghanistan. Some of you will deploy there. As your Commander-in-Chief, I owe you a mission that is clearly defined, and worthy of your service. And that's why, after the Afghan voting was completed, I insisted on a thorough review of our strategy. Now, let me be clear: There has never been an option before me that called for troop deployments before 2010, so there has been no delay or denial of resources necessary for the conduct of the war during this review period. Instead, the review has allowed me to ask the hard questions, and to explore all the different options, along with my national security team, our military and civilian leadership in Afghanistan, and our key partners. And given the stakes involved, I owed the American people -- and our troops -- no less. This review is now complete. And as Commander-in-Chief, I have determined that it is in our vital national interest to send an additional 30,000 U.S. troops to Afghanistan. After 18 months, our troops will begin to come home. These are the resources that we need to seize the initiative, while building the Afghan capacity that can allow for a responsible transition of our forces out of Afghanistan. I do not make this decision lightly. I opposed the war in Iraq precisely because I believe that we must exercise restraint in the use of military force, and always consider the long-term consequences of our actions. We have been at war now for eight years, at enormous cost in lives and resources. Years of debate over Iraq and terrorism have left our unity on national security issues in tatters, and created a highly polarized and partisan backdrop for this effort. And having just experienced the worst economic crisis since the Great Depression, the American people are understandably focused on rebuilding our economy and putting people to work here at home. Most of all, I know that this decision asks even more of you -- a military that, along with your families, has already borne the heaviest of all burdens. As President, I have signed a letter of condolence to the family of each American who gives their life in these wars. I have read the letters from the parents and spouses of those who deployed. I visited our courageous wounded warriors at Walter Reed. I've traveled to Dover to meet the flag-draped caskets of 18 Americans returning home to their final resting place. I see firsthand the terrible wages of war. If I did not think that the security of the United States and the safety of the American people were at stake in Afghanistan, I would gladly order every single one of our troops home tomorrow. So, no, I do not make this decision lightly. I make this decision because I am convinced that our security is at stake in Afghanistan and Pakistan. This is the epicenter of violent extremism practiced by al Qaeda. It is from here that we were attacked on 9/11, and it is from here that new attacks are being plotted as I speak. This is no idle danger; no hypothetical threat. In the last few months alone, we have apprehended extremists within our borders who were sent here from the border region of Afghanistan and Pakistan to commit new acts of terror. And this danger will only grow if the region slides backwards, and al Qaeda can operate with impunity. We must keep the pressure on al Qaeda, and to do that, we must increase the stability and capacity of our partners in the region. Of course, this burden is not ours alone to bear. This is not just America's war. Since 9/11, al Qaeda's safe havens have been the source of attacks against London and Amman and Bali. The people and governments of both Afghanistan and Pakistan are endangered. And the stakes are even higher within a nuclear-armed Pakistan, because we know that al Qaeda and other extremists seek nuclear weapons, and we have every reason to believe that they would use them. 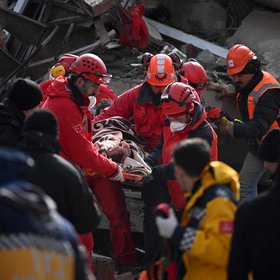