'Poem in October', in which Thomas reflects on his 30th birthday, unfolds verse after verse as you walk through the landscape that made him, and that he remade in turn, culminating with a final clifftop exclaim: "O may my heart's truth still be sung on this high hill in a year's turning."

Thomas died young, at 39, after boasting that he had downed 18 straight whiskeys ("I believe that's the record") in New York in 1953. This month, he would have turned 100. His small country, long ill at ease with its hard-living, hard-loving son who wrote in English, not in Welsh, and caricatured his roots as much as he claimed them, is celebrating perhaps its greatest poet. Thomas has been called the James Joyce of Wales and compared to his own hero, John Keats. He wrote some of the most recognizable verse of the 20th century: "Do not go gentle into that good night/Rage, rage against the dying of the light."

Gillian Clarke, the national poet of Wales who grew up in this part of west Wales, traces her own poetic awakening to the day she first heard Thomas read on the BBC, his voice summoning her 15-year-old self to "the sloeblack, slow, black, crowblack fishboat-bobbing sea" that she too knew so well. "He takes from and gives back to the landscape and the language, until the place speaks the poetry as much as the poetry voices the landscape," Clarke said.

Many here say Thomas' poetry has been denied the recognition it deserves on teaching plans and in academic circles. The colorful stories of his drinking and womanizing - some true, some invented (often by himself) - might have contributed to a James Dean-like notoriety in the United States, where he counts two former presidents, Bill Clinton and Jimmy Carter, among his fans. (Carter was instrumental in winning Thomas a memorial stone, belatedly, in Poets' Corner in Westminster Abbey, in 1982.) But that reputation appalled many in Wales, as did Thomas' flawless English accent. Denied the Welsh language and sent to elocution lessons by his father as a boy, Thomas was long considered too English for the Welsh and too Welsh for the English. ("He belongs to the English," the Welsh nationalist Saunders Lewis scoffed.)

Refocusing public attention on his work has been one of the aims of the centenary, said Hannah Ellis, president of the Dylan Thomas Society of Great Britain and a patron of this year's events. (The other being, no doubt, to make him the tourist attraction that Joyce has long been in Ireland. Thomas' melancholy portrait now appears on everything from whiskey bottles to aprons.) It is a personal quest for Ellis, 36, who shares the poet's short build and unruly locks. The daughter of Thomas' daughter Aeronwy, she discovered her grandfather's work only five years ago when she lost a baby and her mother, and then had a son. She found comfort in Thomas' "timeless wisdom" about life and death and birth and God, she said.

Ellis, a schoolteacher, wants his work to be taught more widely and creatively. A duplicate of his writing shed - complete with a half-smoked pack of Woodbine cigarettes and paper balls of discarded verse strewn across the desk - has been set up at schools, housing projects, literary festivals and even last month's NATO summit in the Welsh capital, Cardiff. Thomas' birthplace, Swansea, that "ugly, lovely town," where he wrote two-thirds of his work in a teenage outpouring, is erecting another statue. Thomas quotations zip around the city center on public maintenance vehicles and the No. 5 bus: "Swansea is still the best place," reads one, an extract from a letter he wrote to a friend in 1938.

There are guided tours of nearly every aspect of Thomas' life: His childhood home; Cwmdonkin Park, whose dense vegetation gave him nightmares of "terrifying half-people," but also became the inspiration for a story about a love triangle; the near beaches of the Gower Peninsula, where he rehearsed for the Swansea Little Theater and debated politics with his friend Bert Trick, a socialist grocer; and a seemingly interminable list of the poet's favorite haunts: the Uplands Hotel, the Bay View, the No Sign Bar, the Antelope, the Mermaid and more. But nothing is as it was in Swansea, badly bombed during the war.

The strangest town in the world

A more timeless glimpse can be found 40 miles west in Laugharne (pronounced LARN), in Thomas' words, "The strangest town in the world." Thomas' parents grew up across the estuary, and he spent his childhood summers in Fern Hill, his aunt's farm and the title of one of his most famous poems. He lived in the area on and off for 15 years, including the last four, and is buried in the village cemetery with his wife, Caitlin. "The soul of his poetry is here," Clarke said.

The Boathouse, where Thomas lived ("a seashaken house on a breakneck of rocks"), is still there, as is Browns Hotel, his local haunt and now a boutique hotel that calls itself "a bar with rooms." At the corner table facing the door, Thomas would "molder," collecting stories and picking up colloquialisms. 'Under Milk Wood', his best-known play, which locals insist is based on their town, chronicles a day in an imaginary seaside village called Llareggub. (Read it backward for a sense of his mischievous humor).

"If Dylan Thomas walked into Laugharne today, he could write 'Under Milk Wood' all over again," Carl Thornton, a 48-year-old architect, said over a pint one recent evening. "In this town, if you say good morning to the wrong person, within 10 hours you are having an affair."

Bob Stevens, the mayor of Laugharne, feels a special relationship with Thomas: His birthday is in October, too. When his children were young, he would take them up Sir John's Hill and read them Thomas' 'Poem in October', telling them of the poet who lived across the water from their family farm. For the centenary, Stevens, 67, created the Dylan Thomas Birthday Walk, which guides literary pilgrims through the poem and its landmarks on a series of placards. The walk is free, and those who come on their own birthday get a free drink at Browns.

"I'm just a farmer, but in the end, I think Dylan was like all of us," Stevens said, quoting the Rev. Eli Jenkins from 'Under Milk Wood': "Not wholly good or bad." On Thomas' hundredth birthday, Stevens said, he just wanted to make sure that the poet's "heart's truth" is still sung on this high hill and beyond. 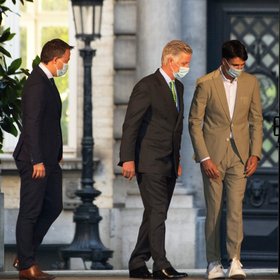