Six years ago, Paul Ryan, who has since become the chairman of the House Ways and Means Committee and the GOP's leading voice on matters economic, had an Op-Ed article published in The New York Times. Under the headline "Thirty Years Later, a Return to Stagflation," he warned that the efforts of the Obama administration and the Federal Reserve to fight the effects of financial crisis would bring back the woes of the 1970s, with both inflation and unemployment high.

True, not all Republicans agreed with his assessment. Many asserted that we were heading for Weimar-style hyperinflation instead.

Needless to say, those warnings proved totally wrong. Soaring inflation never materialized. Job creation was sluggish at first, but more recently has accelerated dramatically. Far from seeing a rerun of that '70s show, what we're now looking at is an economy that in important respects resembles that of the 1990s.

To be sure, there are big differences between America in 2015 and America in the '90s. TV is much better now, the situation of workers much worse. While stocks are high and there is talk of a new technology bubble, there's nothing like the old euphoria. There is also, unfortunately, no sign that the great productivity surge of 1995-2005, brought on as businesses adopted information technology, is coming back.

Still, we're now adding jobs at a rate not seen since the Clinton years. And it goes without saying that low inflation combined with rapid job growth makes nonsense of all those predictions that Obamacare, or maybe just the president's bad attitude, would destroy the private sector.

But pointing out yet again just how wrong the usual suspects on the right have been about, well, everything isn't the only reason to note parallels with the 1990s. There are also implications for monetary policy: Recent job gains have brought the Fed to a fork in the road very much like the situation it faced circa 1995. Now, as then, job growth has taken the official unemployment rate down to a level at which, according to conventional wisdom, the economy should be overheating and inflation should be rising. But now, as then, there is no sign of the predicted inflation in the actual data.

The Fed has a dual mandate - it's supposed to achieve both price stability and full employment. At this point price stability is conventionally taken to mean low but positive inflation, at around 2 percent a year. What does it mean to achieve full employment? For the Fed, it means reaching the NAIRU - the non-accelerating-inflation rate of unemployment, which is consistent with that inflation target.

The Fed currently estimates the NAIRU at between 5.2 percent and 5.5 percent, and the latest report puts the actual unemployment rate at 5.5 percent. So we're there - time to raise interest rates!

Or maybe not. The NAIRU is supposed to be the unemployment rate at which the economy overheats and an inflationary spiral starts to kick in. But there is no sign of inflationary pressure. In particular, if the job market really were tight, wages would be rising quickly, whereas they are in fact going nowhere.

The thing is, we've been here before. In the early-to-mid 1990s, the Fed generally estimated the NAIRU as being between 5.5 percent and 6 percent, and by 1995, unemployment had fallen to that level. But inflation wasn't actually rising. So Fed officials made what turned out to be a very good choice: They held their fire, waiting for clear signs of inflationary pressure. And it turned out that the U.S. economy was capable of generating millions more jobs, without inflation, than it would have if the Fed had reined in the boom too soon.

Are we in a similar situation now? Actually, I don't know - but neither does the Fed. The question, then, is what to do in the face of that uncertainty, with no inflation problem yet in sight.

To me, as to a number of economists - perhaps most notably Lawrence Summers, the former Treasury secretary - the answer seems painfully obvious: Don't yank away that punch bowl, don't pull that rate-hike trigger, until you see the whites of inflation's eyes. If it turns out that the Fed has waited a bit too long, inflation might overshoot 2 percent for a while, but that wouldn't be a great tragedy. But if the Fed moves too soon, we might end up losing millions of jobs we could have had - and in the worst case, we might end up sliding into a Japanese-style deflationary trap, which has already happened in Sweden and possibly in the eurozone.

What's worrisome is that it's not clear whether Fed officials see it that way. They need to heed the lessons of history - and the relevant history here is the 1990s, not the 1970s. Let's party like it's 1995; let the good, or at least better, times keep rolling, and hold off on those rate hikes. 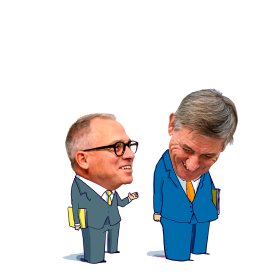