The Bank of Japan, this country's equivalent of the Federal Reserve, has lately been making a big effort to end deflation, which has afflicted Japan's economy for almost two decades. At first its efforts - which involve printing a lot of money and, even more important, trying to assure investors that it will keep printing money until inflation reaches 2 percent - seemed to be going well. But more recently the economy has lost momentum, and last week the bank announced new, even more aggressive monetary measures.

I am, as you might guess, very much in favor of this move, although I worry that the policy might nonetheless fail thanks to fiscal mistakes. (More about that later.) While the bank did the right thing, however, it did so amid substantial internal dissent. In fact, the new stimulus was approved by only five of the bank board's nine members, with those closest to business voting against. Which brings me to the subject of this column: the economic wisdom, or lack thereof, of business leaders.

Some of the people I've spoken to here argue that the opposition of many Japanese business leaders to the Bank of Japan's actions shows that it's on the wrong track. In saying this, they're echoing a common sentiment in many countries, including the United States - the belief that if you want to fix an ailing economy, you should turn to people who have been successful in business, like leaders of major corporations, entrepreneurs and wealthy investors. After all, doesn't their success with money mean that they know how the economy really works?

Actually, no. In fact, business leaders often give remarkably bad economic advice, especially in troubled times. And I think it's important to understand why.

About that bad advice: Think of the hugely wealthy money managers who warned Ben Bernanke that the Fed's efforts to boost the economy risked "currency debasement"; think of the many corporate chieftains who solemnly declared that budget deficits were the biggest threat facing America, and that fixing the debt would cause growth to soar.

In Japan, business leaders played an important role in the fiscal mistakes that have undermined recent policy success, calling for a tax hike that caused growth to stall earlier this year, and a second tax hike next year that would be an even worse error.
And on the other side, the past few years have seen repeated vindication for policymakers who have never met a payroll, but do know a lot about economic theory and history. The Federal Reserve and the Bank of England have navigated their way through a once-in-three-generations economic crisis under the leadership of former college professors - Ben Bernanke, Janet Yellen and Mervyn King - who, among other things, had the courage to defy all those tycoons demanding that they stop printing money. The European Central Bank brought the euro back from the brink of collapse under the leadership of Mario Draghi, who spent the bulk of his career in academia and public service.

Obviously there are business leaders who have gotten the economic analysis right, and plenty of academics who have gotten it wrong. (Don't get me started.) But success in business does not seem to convey any special insight into economic policy. Why?
The answer, to quote the title of a paper I published many years ago, is that a country is not a company. National economic policy, even in small countries, needs to take into account kinds of feedback that rarely matter in business life. For example, even the biggest corporations sell only a small fraction of what they make to their own workers, whereas even very small countries mostly sell goods and services to themselves.

So think of what happens when a successful businessperson looks at a troubled economy and tries to apply the lessons of business experience. He or (rarely) she sees the troubled economy as something like a troubled company, which needs to cut costs and become competitive. To create jobs, the businessperson thinks, wages must come down, expenses must be reduced; in general, belts must be tightened. And surely gimmicks like deficit spending or printing more money can't solve what must be a fundamental problem.

In reality, however, cutting wages and spending in a depressed economy just aggravates the real problem, which is inadequate demand. Deficit spending and aggressive money-printing, on the other hand, can help a lot.
But how can this kind of logic be sold to business leaders, especially when it comes from pointy-headed academic types? The fate of the world economy may hinge on the answer.

Here in Japan, the fight against deflation is all too likely to fail if conventional notions of prudence prevail. But can unconventionality triumph over the instincts of business leaders? Stay tuned. 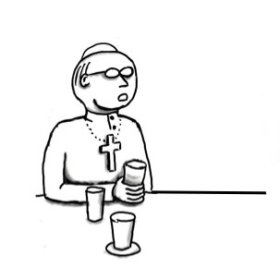