In any normal election year, we'd compare the two presidential candidates side by side on the issues. But this is not a normal election year. A comparison like that would be an empty exercise in a race where one candidate — our choice, Hillary Clinton — has a record of service and a raft of pragmatic ideas, and the other, Donald Trump, discloses nothing concrete about himself or his plans while promising the moon and offering the stars on layaway. (We will explain in a subsequent editorial why we believe Trump to be the worst nominee put forward by a major party in modern American history.)

But this endorsement would also be an empty exercise if it merely affirmed the choice of Clinton supporters. We're aiming instead to persuade those of you who are hesitating to vote for Clinton — because you are reluctant to vote for a Democrat, or for another Clinton, or for a candidate who might appear, on the surface, not to offer change from an establishment that seems indifferent and a political system that seems broken.

Running down the other guy won't suffice to make that argument. The best case for Hillary Clinton cannot be, and is not, that she isn't Donald Trump.

The best case is, instead, about the challenges this country faces, and Clinton's capacity to rise to them.

The next president will take office with bigoted, tribalist movements and their leaders on the march. In the Middle East and across Asia, in Russia and Eastern Europe, even in Britain and the United States, war, terrorism and the pressures of globalization are eroding democratic values, fraying alliances and challenging the ideals of tolerance and charity.

The 2016 campaign has brought to the surface the despair and rage of poor and middle-class Americans who say their government has done little to ease the burdens that recession, technological change, foreign competition and war have heaped on their families.

Over 40 years in public life, Hillary Clinton has studied these forces and weighed responses to these problems. Our endorsement is rooted in respect for her intellect, experience, toughness and courage over a career of almost continuous public service, often as the first or only woman in the arena.

Clinton's work has been defined more by incremental successes than by moments of transformational change. As a candidate, she has struggled to step back from a pointillist collection of policy proposals to reveal the full pattern of her record. That is a weakness of her campaign, and a perplexing one, for the pattern is clear. It shows a determined leader intent on creating opportunity for struggling Americans at a time of economic upheaval and on ensuring that the United States remains a force for good in an often brutal world.

Similarly, Clinton's occasional missteps, combined with attacks on her trustworthiness, have distorted perceptions of her character. She is one of the most tenacious politicians of her generation, whose willingness to study and correct course is rare in an age of unyielding partisanship. As first lady, she rebounded from professional setbacks and personal trials with astounding resilience. Over eight years in the Senate and four as secretary of state, she built a reputation for grit and bipartisan collaboration. She displayed a command of policy and diplomatic nuance and an ability to listen to constituents and colleagues that are all too exceptional in Washington.

Clinton's record of service to children, women and families has spanned her adult life. One of her boldest acts as first lady was her 1995 speech in Beijing declaring that women's rights are human rights. After a failed attempt to overhaul the nation's health care system, she threw her support behind legislation to establish the Children's Health Insurance Program, which now covers more than eight million lower-income young people. This year, she rallied mothers of gun-violence victims to join her in demanding comprehensive background checks for gun buyers and tighter reins on gun sales.

After opposing driver's licenses for undocumented immigrants during the 2008 campaign, she now vows to push for comprehensive immigration legislation as president and to use executive power to protect law-abiding undocumented people from deportation and cruel detention. Some may dismiss her shift as opportunistic, but we credit her for arriving at the right position.

Clinton and her team have produced detailed proposals on crime, policing and race relations, debt-free college and small-business incentives, climate change and affordable broadband. Most of these proposals would benefit from further elaboration on how to pay for them, beyond taxing the wealthiest Americans. They would also depend on passage by Congress.

That means that, to enact her agenda, Clinton would need to find common ground with a destabilized Republican Party, whose unifying goal in Congress would be to discredit her. Despite her political scars, she has shown an unusual capacity to reach across the aisle.

When Clinton was sworn in as a senator from New York in 2001, Republican leaders warned their caucus not to do anything that might make her look good. Yet as a member of the Senate Armed Services Committee, she earned the respect of Republicans like Sen. John McCain with her determination to master intricate military matters.

Her most lasting achievements as a senator include a federal fund for long-term health monitoring of 9/11 first responders, an expansion of military benefits to cover reservists and the National Guard, and a law requiring drug companies to improve the safety of their medications for children.

Below the radar, she fought for money for farmers, hospitals, small businesses and environmental projects. Her vote in favor of the Iraq War is a black mark, but to her credit, she has explained her thinking rather than trying to rewrite that history.

As secretary of state, Clinton was charged with repairing American credibility after eight years of the Bush administration's unilateralism. She bears a share of the responsibility for the Obama administration's foreign-policy failings, notably in Libya. But her achievements are substantial. She led efforts to strengthen sanctions against Iran, which eventually pushed it to the table for talks over its nuclear program, and in 2012, she helped negotiate a cease-fire between Israel and Hamas.

Clinton led efforts to renew diplomatic relations with Myanmar, persuading its junta to adopt political reforms. She helped promote the Trans-Pacific Partnership, an important trade counterweight to China and a key component of the Obama administration's pivot to Asia. Her election-year reversal on that pact has confused some of her supporters, but her underlying commitment to bolstering trade along with workers' rights is not in doubt. Clinton's attempt to reset relations with Russia, though far from successful, was a sensible effort to improve interactions with a rivalrous nuclear power.

Clinton has shown herself to be a realist who believes America cannot simply withdraw behind oceans and walls, but must engage confidently in the world to protect its interests and be true to its values, which include helping others escape poverty and oppression.

Clinton's husband, Bill Clinton, governed during what now looks like an optimistic and even gentle era. The end of the Cold War and the advance of technology and trade appeared to be awakening the world's possibilities rather than its demons. Many in the news media, and in the country, and in that administration, were distracted by the scandal du jour — Clinton's impeachment — during the very period in which a terrorist threat was growing. We are now living in a world darkened by the realization of that threat and its many consequences.

Clinton's service spans both eras, and she has learned hard lessons from the three presidents she has studied up close. She has also made her own share of mistakes. She has evinced a lamentable penchant for secrecy and made a poor decision to rely on a private email server while at the State Department. That decision deserved scrutiny, and it's had it. Now, considered alongside the real challenges that will occupy the next president, that email server, which has consumed so much of this campaign, looks like a matter for the help desk. And, viewed against those challenges, Trump shrinks to his true small-screen, reality-show proportions, as we'll argue in detail on Monday.

Through war and recession, Americans born since 9/11 have had to grow up fast, and they deserve a grown-up president. A lifetime's commitment to solving problems in the real world qualifies Hillary Clinton for this job, and the country should put her to work. 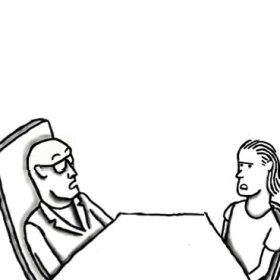